How to secure your home without an alarm.

As a first principal alarm systems are surveillance only, meaning they are there to “listen and watch” and when they detect something suspicious they will make a sound and or transmit a message to a person somewhere.

They only create a ‘degree of uncomfortability’ for the the intruder and most of the time not even that.

As today’s criminals are more and more desperate due to chronic unemployment or drug addiction they are more brazen in their attempts to break into your property.

Simply having a sign in your window or mounting a camera on the outside of one’s building isn’t enough to deter today’s determined criminal.

There is a great deal of anecdotal data to support the deterrence aspects of surveillance systems, and there is just as weighty evidence to show that deterrence systems don’t make any difference at all.

It’s important not to get caught up in the semantics of the arguments, there is a basic question you need to ask yourself which cuts through all the philosophizing.

How would you stop an intruder?

2. With an impact resistant door

This is the only real question because on the day after an attack on your house, you’ll either be glad you had heavy duty real physical security or sad because your efforts only added up to trying to ‘scare’ an intruder away with a sticker and camera.

Real physical security is built of hard materials which are engineered together to create an almost impenetrable surface. Alarm systems are designed to 1. Scare away intruders 2. capture evidence.

The technology should rightly be called ‘surveillance systems’ and not ‘security systems’ because how can you put a camera beside a bullet proof door and say that they are the same thing. Sure Surveillance is part of security, but it is the soft side.

Most home invasions happen through a door. In many cases the criminal simply walks right in through an open or unlocked door. In other cases it is the door which is broken by the intruder to gain entry.

Doors are easy to pass through and they also are large enough to carry stolen items out. From an engineering point of view doors are the only openings in a building envelope which are designed for the whole body of a person to pass through in or out of the building. The weight of habit of using doors and the lack of imagination of intruders to find other ways to enter makes doors the top soft spot to gain entry.

Hard and Soft needs to be explained to illustrate this point further. Soft points in a building envelope are the locations where entry into the building is easy. it means that not much force is required to get in. An open door, and open window represent soft spots in a building.

By comparison hard spots would be a brick wall or through the foundation underground. in the simplest of terms, HARD and SOFT is determined by the strength of the materials used and in the way they are attached to one another.

It follows that hard surfaces are more difficult to break-in to while soft surfaces offer easy access. There is a contradiction with this concept when thinking about a door. On the one hand it is desirable that a door is soft which means that it is easy to enter and exit a building. On the other hand when a door is closed the desire would be to make it as hard as possible, because it is the first point of attack of an intruder.

High Security doors need to accomplish a couple of difficult things at the same time.

1. Be easy to operate

2. offer a hardness to deter an intruder.

Speak to an Expert.

Hardening of the Structure:

If you look at a building from the point of view of an intruder you’ll naturally gravitate to finding the “Soft Spots” where you will want to break in.

If you look at the same building from the point of view of the homeowner, then you’ll want to convert those “soft Spot” into “Hard” ones. The process of converting the soft spots of a building into  “hard spots” is called “Hardening the Structure”.

This is real security and can not be done by just putting up a camera or placing a sticker in your window. Hardening of a structure is done by physically improving the materials located in soft spots and replacing them with harder materials which are more completely integrated with the the other hard elements of the building envelope.

is the the operating part of a door, it’s the part of a door which swings open and closed. On one side of the door there are hinges which connect the slab to the frame permanently, on the other side of the slab there is the hardware or handset. The door slab operates within a frame which fits the door exactly providing a continuous contact point around the entire perimeter of the slab.

Construction of the slab is critical to a high security door. The slab needs to have a strong internal framework, upon the framework there will be a skin which is the tactile surface of the door. A door slab frame and skin need to connect with each other in an extremely durable and dependable manner. It is common for the empty space between the skins of a door to be filled with insulation. The skins of a security door will be made of material which is resistant to impacts or penetration.

As mentioned before the slab of the door has hardware connected to it, hinges and the handset. The integration of the hinges into the door slab is critical for the security of the door. For example, the internal framework of the door slab should be connected directly to the hinges and handset. This provides for a continuity of the strength of material used. The idea that a chain is only as strong as its weakest link works  here, and in the construction of a security door the link between the door frame and the hardware is just such a point of either strength or weakness.

On the other side of the door from the hinges is the handset which is manually operated.

can be very sophisticated and will only be examined lightly here. The handset is part of the hardware and it is manually operated by people. As with the hinges it is critical for the handset to be well connected with the framework of the slab. Additionally the connection with the door frame is critical. The handset – door frame connection is the most vulnerable part of a door.

This action of the bolt, for it to retract into the slab or extend out from the slab requires a number of moving parts, which is the achilles heal of the handset. Moving parts are always more difficult to secure than stationary parts. Moving parts need to operate together without fail and be able to withstand a lot of abuse. If this weren’t enough, the hardness of the materials themselves is another factor when considering the security of the door.

A window or “see-through” part in a door is called a LITE, people can see in and out of the door as well as light being able to pass through. The type of glass and the hardness of the glass in a door lite is essential for high security. Particularly, if the door has a large lite, sometimes called a FULL-LITE when it goes all the way from top to bottom, the glass makes up most of the slab. In this type of door design, which is typical for balcony or deck walkout doors, there needs to be specific engineering into the strength and impact resistance of the lite itself. And as you probably expected, the connect of the lite with the rest of the door slab is also very important. 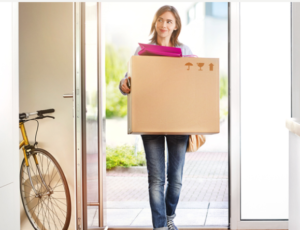 1. it holds the slab and connects with the slab when closed

2. It connects to the building envelope.

Hardware Connection – Critical for Hardening of the Structure

We have already mentioned the importance of the Slab – hardware connection, now we’ll explore the hardware – frame connection.

Why you may ask? 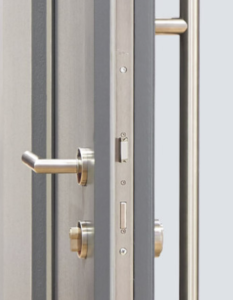 Because if the door slab and the lite are well constructed with hard materials and the intruder is not having much luck getting in.

The next place they will explore for a soft-spot is the connection points of the hardware around the perimeter of the door.

In soft doors which hold no security level at all, it is easy to see that the weakest point of the entire door system is the connection between the handset bolt and the frame. In many cases the entire door system may be compromised because the “weakest link in the chain” is the little hole in the frame where the bolt of the handset enters when the door is closed and the bolt is thrown into the locked position. Often times this will look like less than 1/2” (10mm) of wood. Which can be easily broken with one good kick.

So the hardware connection with the frame is critical because classically this has been a weak point in door design, and a motivated intruder will test this aspect of your door if they want to gain entry.

The solution for a good hardware-door frame connection is that the door frame is well constructed with hard materials and reinforced in locations which are known to be areas of focus by intruders wishing to break-in.

On the outside of the frame is where the entire door system is integrated into the building envelope, it’s where the door system is built into the wall. These details may seem minute, but in truth are very big importances, for example the length and type of screw used to anchor the door frame into the wall and the way the wall accepts that fastener may be the make or break point when an intruder try’s to test the overall door system.

As you will have learned in this article, securing your home without an alarm will lead you into some interesting and valuable engineering considerations. It isn’t rocket science, but there is a degree of complexity which is worthwhile to understand. Ultimately, you are the one who will care about your security more than anyone else, it pays to learn how to secure yourself physically, because frankly, the alternative is very very unfortunate.

Swiss Shade + Security is a custom security window and door supplier and installer. We look forward to working with you.

Projects
Tilt & Turn
Our Services
About Us